Seawater contains a large amount of suspended solids, colloids, salts, hardness, dissolved gases, bacteria and algae, etc. These harmful substances should be removed before seawater desalination to reduce their adverse effects on the subsequent desalination system. Seawater desalination is the process of removing excess salt and minerals from seawater to obtain fresh water, and is the process of converting seawater into usable water resources for human drinking, irrigation and industrial needs.

Finding alternative water sources for drinking and industrial use where fresh water is scarce. Seawater is a vast and readily available resource, and its desalination is already common in arid regions of the world. The use of micro-filtration and reverse osmosis is becoming the accepted standard for desalination. Common desalination generally consists of two parts:
1. Pre-treatment part: it is to effectively remove some impurities such as granular mud  sand, colloids and microorganisms in seawater, which can make the reverse osmosis system operate stably for a long time.
2. Desalination part: the main function is the process of removing most of the anions and cations, macromolecular organic matter and some microorganisms through the physical sieving of the reverse osmosis membrane and ultra-filtration in the reverse osmosis equipment.. 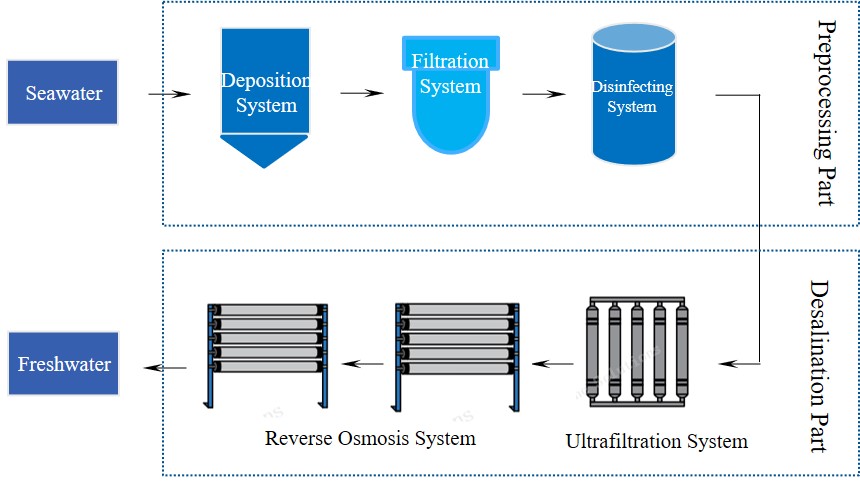 The use of Membrane Solutions sediment filter Cartridge in combination with RO membrane can efficiently and economically convert seawater into high-quality freshwater. Its recommendations for the filtration and applications of the main sites in the process of seawater desalination are as follows: